Evolution Gaming Casinos – The Next Step in Gambling Entertainment

Evolution is the greatest success story in the iGaming industry for the last decade. This company made live dealer games a must-have feature for every respectable online casino, and its premium streams have captivated countless players looking for a more realistic gambling experience.

When competing studios started to catch on, Evolution introduced new entertainment options that solidified its position as the top dog in the live dealer sector. These original streams are super popular and a big reason why Evolution Gaming casinos are in demand. If you want to find out more about them, read on. Our experts have also selected the best websites with live games you can join today.

Which Evolution Games Should You Try?

If you’ve played live dealer games in the past, you probably have an idea of what to expect when visiting such a lobby. Traditional table games like poker, roulette, baccarat, and blackjack are offered by nearly every studio out there. Evolution is no different in this regard, but the company has also developed exciting and unique streams that it calls “Game Shows.” This category attracts the most interest, so we’ll focus on it while also highlighting other standout Evolution Gaming games. Let’s begin!

Unsurprisingly, the yellow 1:1 zones are the most common on the wheel, while the red x40 sections are the rarest. Evolution Gaming online casinos also include special multiplier segments of x2 and x7 on the wheel. If the flapper stops on them, your wager stays for another spin, which will be augmented by the multiplier. What’s interesting about these special segments is that they stack. For example, if you’ve wagered on 2 and the following three results are x2, x7, and 2, you’ll win an amount worth x28 times your bet. 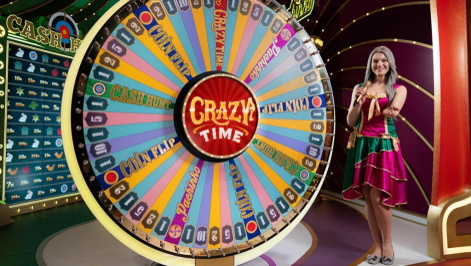 This one is by far the hottest stream in any online casino lobby. It often attracts crowds of 5,000-8,000+ people who bet, chat, and follow the action. Crazy Time is based on Dream Catcher but includes a mini-slot game and four bonus rounds with explosive winning potential. This title has a larger house edge than the previous one we discussed, but players prefer it because it’s more entertaining and volatile.

The round begins with a spin on the big wheel. Before the flipper stops on a segment, an Evolution Gaming slots machine with two reels is activated. The left drum contains the numbered zones and bonus games, while the right one has different multipliers. If the two reels align perfectly on the winning line, the segment on the left is boosted by the multiplier on the right for the following spin. For example, if you bet on 5, the slot lands on 5 and an x50 multiplier, you’ll win 250:1 if the wheel eventually stops on 5.

Remember, you can make a free registration with an operator from our Evolution Gaming casino list to watch the stream gratis or play for real money. Now, let’s continue with a breakdown of the bonus stages:

The Lightning series — You can play roulette, sic bo, and baccarat with a twist. Random multipliers are added to different cards and numbers on each round. Keep in mind that some rule adjustments are in place to fine-tune the return rates to what’s typical for the genre. For example, in “Lightning Baccarat,” you have to pay a flat 20% commission on every bet to participate.

One-to-many blackjacks — In addition to standard 7-seater rooms, Evolution Gaming online casinos feature blackjack sessions that can host an unlimited number of participants. The croupier deals a community hand, and every bettor decides how to play it. The “Infinite,” “Power,” and “Free Bet” broadcasts abide by such rules and include four side bets.

Craps — Evolution was the first to develop a live dealer version of craps, and, so far, it’s the only studio that offers this game. The craps table is quite the technological wonder, as it has an automated dice-throwing mechanism and a super intuitive virtual overlay. If you don’t know how to play, you can check out the tutorial and activate “easy mode” to smooth out the learning curve.

The Software Provider’s Online Casinos Are Safe and Fair

Before checking out our recommended Evolution Gaming casinos, it’s a good idea to learn more about the business. This company was created in 2006. Its parent organization is located in Stockholm, Sweden and is publicly traded on the local exchange. Throughout the years, Evolution has expanded rapidly and is now working with some of the biggest gaming sites in Europe and North America.

Its main base of operations is in Riga, Latvia, but the firm has subsequently opened studios in the USA, Canada, Spain, Belgium, Malta, and other countries. Evolution streams are inspected and approved by the most respected accredited testing facility — eCOGRA. Additionally, the business is regulated by a wide array of government organizations like the UKGC and the MGA (MGA/B2B/187/2010).

Evolution online casinos often include content from NetEnt, Red Tiger Gaming, and Ezugi. That’s because the leader in live dealer games acquired these famous software suppliers in the past few years.